I’m sure that like me you’ll remember learning in school that the Catholic Church forbade the consumption of meat, eggs and dairy produce during Lent so on Shrove Tuesday all these ‘luxuries’ had to be eaten and thus the pancake was invented!

Did you also have a box in which to save all the sweets you couldn’t eat during Lent? Remember the excitement of the dispensation for St Patrick’s Day? Our poor parents – imagine the sugar high we must all have been on once Easter Sunday came around!

But did you know that apparently there was a link between Shrove Tuesday and the romantic fortunes of the unmarried. “Traditionally in Ireland, marriage was forbidden to take place during Lent, so in the weeks before Christmas and “Shrovetide,” as it’s sometimes called, matchmakers busily tried to find suitable candidates for marriage before Ash Wednesday arrived. Households left with unmarried daughters on Shrove Tuesday tried to imbue them with better luck for the coming year by allowing them to toss the first cake. Their pancake-making skills, for better or worse, were seen as an indication of their romantic chances for the next year.”

Pass me that frying pan quickly!

My recipe for pancakes comes from the Children’s Section of my Mum’s old Good Housekeeping Cookbook – I used to love looking through this and trying out recipes when I could!

There are still little bookmarks in the book for recipes I wanted to try – I never did get to make lollipops, glucose and lollipop sticks were far too exotic back then!

The one recipe I do remember using (and still use) is the one for pancakes. I use the imperial measurements for this but have brought it up to date with the metric equivalents! 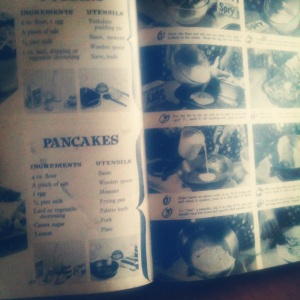 This recipe should yield 10-12 thin pancakes using an 8” /20 cm frying pan. If you want to cook them in advance stack the pancakes with a piece of parchment paper between each of them. But they’re best hot from the pan!

When it comes to fillings it’s hard to beat the traditional  lemon juice and caster sugar, but nutella comes a close second in my book! What’s your favourite?

Don’t forget you can do savoury fillings as well as sweet – sautéed mushrooms, stir fry veg., creamy chicken…..Just let your imagination take over.  I remember one pancake party where my friend Siobhan served pancakes with a variety of stuffings including one with beansprouts – one of the guests was later heard to say he wasn’t mad about the ones with the straw in them!

Just remember the first pancake is always a disaster- best hide it so it doesn’t adversely affect your romantic prospects!!!! 😉

Mad about all things food! I run a boutique catering business and a small cookery school. View all posts by heypesto

This site uses Akismet to reduce spam. Learn how your comment data is processed.