I grew up in Tullamore. I went to school beside the Grand Canal. I even went on my holidays to Vicarstown- on- the- Canal (well somebody had to!) . But until a few weeks I had never been on the canal ! In fact I’m ashamed to say it I had never even been inside the inner harbour in Tullamore (that’s the one behind the big gates on Harbour Street , yes the clue is in the name!!!)

Now I can say not only have I been on 2 barges but I have cooked on one!

After Taste of Offaly I received a phone call asking me would I like to cook local produce as part of A Grand Experience,  a film documentary being made by Mixed Bag Media about the Grand Canal and all Offaly has to offer. Would I what? Just try and stop me!

Meetings were held and I was dispatched to source lots of local food – and do you know we have a wealth of amazing produce in Offaly?

The film is a part of Offaly County Council’s public art project and follows 3 local artists  on the six-day journey along the Grand Canal on the historic Lora Marie 68m barge. The artists were Offaly playwright and Pure Mule author Eugene O’Brien, singer-songwriter Wayne Brennan and Veronica Nicholson, a photographer and installation artist who were recording their impressions of Offaly during the journey

The night the 68M arrived in Tullamore Harbour with crew and artists on board – I fed them Offaly Lamb from Annaharvey with a Moroccan Twist and  Sticky Toffee Pudding. I wasn’t ‘acting’ that evening – just delivering! The 68M is a fabulous Heritage barge lovingly restored and I’m only sorry I didn’t get to spend a week on it!

The following morning everything kicked off – well for me anyway! I was cooking brunch on another barge, Saoirse ar an Uisce – well I thought I was cooking brunch until a panic phone call told that due to engine trouble it would now be breakfast! See the joys of stardom!!

So early on the Thursday morning I loaded up on my fabulous Offaly produce and headed for the canal to start cooking.

On the menu was:

Cooking in a galley kitchen  whilst 1) waiting for local dignitaries, the artists and 2) trying to ignore the camera crew was different and great fun! (Did I mention I love the variety my job offers?) 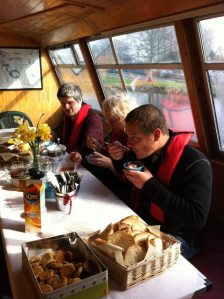 The Artists enjoying the granola – the sausages were a big hit too! 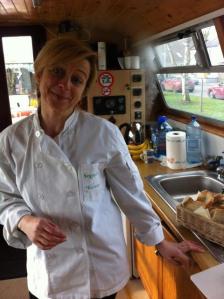 Once everyone was fed and watered I was delighted to stay on the barge (engine trouble sorted!)for my first canal trip and follow the 68 M albeit only as far as Boland’s Lock .

I had to say goodbye as I was off to Dublin to cater another job.

I want to say a huge thanks to all the Offaly Food Producers who were so generous with their fabulous produce and to Martina & Garett for inviting me to part of this project, and to everyone who made me feel so relaxed and welcome on the day.

I’m looking forward to the Film ‘Premiere’ and keeping my fingers (and toes) crossed that I don’t end up on the cutting room floor! I’m available for autographs………….

PS now that you see what a wealth of local food we have why not support our local producers? You can buy the products listed in The Farmer’s Gate and Farm Factory Direct both in Tullamore and in  The Organic Store in Birr.

Mad about all things food! I run a boutique catering business and a small cookery school. View all posts by heypesto

6 thoughts on “A Grand Experience – my brush with fame!”

This site uses Akismet to reduce spam. Learn how your comment data is processed.