Now that January is over and we’ve all been good and stuck to our resolutions to eat healthier (what do you mean you haven’t??)  it’s time to start thinking about treats for Valentine’s Day.
And speaking of resolutions it’s high time I stuck to mine and updated my blog.

I’ve been doing some research on aphrodisiacs in advance of my Valentine’s cooking and I’m now a font of trivia!

Did you know that basil was used for seduction by women in Moldova? Or that Catholic priests in Spain banned avocados because they found them obscenely sexual? END_OF_DOCUMENT_TOKEN_TO_BE_REPLACED

When asked about Irish food producing areas the Midlands is rarely the first place that comes to mind  but did you know that we have our own honey, ice cream, yoghurts, sausages, cordials, cheese, chocolate, bread, chorizo …..to name but a few products

END_OF_DOCUMENT_TOKEN_TO_BE_REPLACED

My poor blog has been very neglected of late so it’s time to pay it some attention and share a recipe for Valentine’s Day.

In preparation for my ‘Cupid’s Cookery‘ class last week I did a little research on aphrodisiacs and found lots of trivia. Did you know that basil was used for seduction by women in Moldova? Or that Catholic priests in Spain banned avocados because they found them obscenely sexual?

Other reputed aphrodisiacs are honey, almonds and chocolate – so what better way to celebrate St Valentine’s Day than to present the object of your affections with a combination of all three?

This recipe is based on one I found in the course of my research….I’ve made a few alterations and  I hope you like it……

I also made individual ones for last week’s date night  – one with added sea salt which I preferred but The Chief Taster preferred the Cointreau version!

Did it live up to expectations? Well, let’s just say there were no complaints ……

It’s beginning to feel a lot like Christmas around here – the tree is up, the lights are on and I’m doing up my Christmas menus which will include this Christmas Wreath Cake as an alternative to the traditional fruit cake

I may have mentioned that I’m not really a dessert person – give me savoury any day – but I love making desserts and watching others enjoy them! I came across this wreath cake a few years ago – in a copy of Good Housekeeping I think – and have been using it every Christmas since.

I should warn you that this is a cake for serious chocoholics and not for the fainthearted, but it makes a great centrepiece on Christmas Day!

It’s an easy cake to make and it freezes well (un-iced ) so you can make it in advance and take it out to decorate on Christmas Eve.

The only special piece of equipment you will need is a ‘wreath’ tin i.e. a 23cm spring form cake tin with a but missing in the middle! I use one I bought in  Ikea  but  I know my local  shop ‘Kit Your Kitchen‘  now stock similar .

Turn your oven to 180 C or Gas 4 before you start and grease your tin with butter.

Then it’s time for your (or your children’s ) imagination to take over…..

You can make chocolate leaves ….. 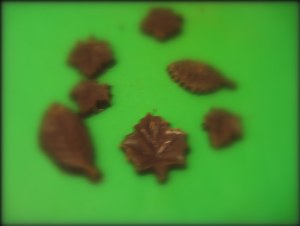 But whatever you decide please be warned that this cake is INCREDIBLY rich and a little goes a long way!

PS I have been known to make this into an Easter Cake by covering it with flowers and mini eggs – you see a cake’s not just for Christmas!

When is a recipe a family recipe?  Does someone in your family have to develop the recipe from scratch or can it be a recipe that is used a few times and then becomes a family favourite?

I’ve been involved in several conversations on this topic and my maths brain tells me that there has to be a finite (albeit large)  number of recipe combinations so there are bound to be duplicates making it harder to credit the original originator of a recipe!

I believe that recipes  evolve  through sharing and experimentation. I have scraps of paper from family and friends glued into my recipe notebook  including a very precious  one dictated by my late Grandmother for her famous brown bread – once I figure out how much is in a ‘handful’ I’m sure it will work…..

I have a ‘to try’ box filled with recipes cut  from magazines and papers that I want to try …..someday

I have a vast collection of cookbooks that I love to cook from – but more often than not I’ll change something as I’m going along.

Don’t you hate it if  you  ask somebody for a recipe and they refuse to share it as it’s a ‘family secret’?

I make a lot of Chocolate Roulades – in fact it’s one of my main desserts. I love making a mini version to go on a mixed dessert plate.  I was given the recipe by the lady who owned the catering company I used to work for. I changed the quantities slightly to make it work in a bigger tin., and added the brandy! Years later I came across practically the same recipe in one of the Avoca books – so does the recipe belong to the person who first gave me the recipe, to the author or to me ???

I hate to think of myself as possessive so I’m more than willing to share this wonderful recipe, whoever it  actually ‘owns’ it.  I hope you like it. 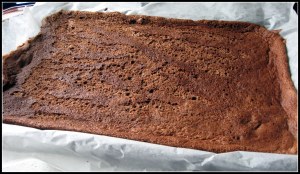 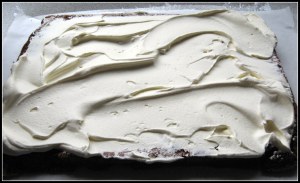 PS This works really well as a Christmas Log – decorate it with chocolate leaves and a robin – or lots of chocolate bark and sprinkles!

So it’s that time of the year – Valentine’s Day or should I say the ultimate Hallmark day! Time to bring out your inner romantic and make everything pink and heart shaped……..

And if my black pudding starter seems very ‘hearty’ well here is the ultimate chocolate cake to finish off your romantic meal á deux! (what you choose to have for main course is entirely up to you………….)

I came across this recipe when I was putting together a ‘Cupid’s Cooking’ class last year and it went down very well. I think it came from Delicious Magazine so I hope they don’t mind my variation on it!

Preheat your oven to 180C/Fan 160C/Gas 4.  You’ll need a loose bottomed heart-shaped tin – I got mine from Kit Your Kitchen last year and I’m sure Gemma will have some  in stock this year

Put butter, vanilla, chocolate and sugars into a bowl 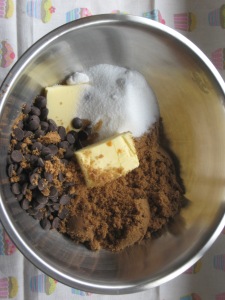 Place bowl over a saucepan of simmering water and heat  until melted. 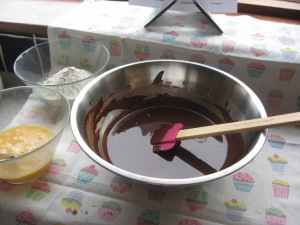 Remove bowl from heat, add in the beaten eggs and fold in the flour 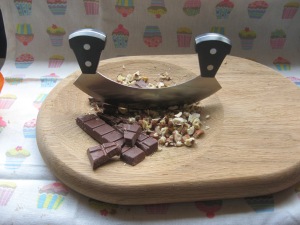 Finally stir in the chopped hazelnuts and butterscotch chocolate.
Pour the cake mix into a buttered, heart shaped tin and bake in a preheated oven for 25 mins until top is firm to touch but cake is still squidgy inside.

Allow to cool in tin for 15 mins before carefully turning out onto serving plate.

and serve warm with whipped cream and lots of love……..

Did I mention I had a very interested observer while all this was going on…. 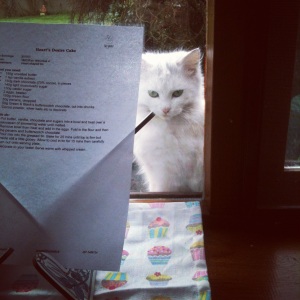 PS Valentine if you’re reading this, I have the cake so  flowers or jewellery will do……….

I can’t believe it’s 9 years ago since I did the 12 week course in Ballymaloe Cookery School! After the stress of the exams and as a parting gift Darina gave us signed copies of her Christmas cookbook.

In my enthusiasm I decided that straight away I had to make the cover recipe – the Chocolate Christmas Tree.

I have two memories of this experiment:

So why 9 years on did I decide to try again? Well I thought I could try a child friendly version so with my junior chef visiting for the weekend I set to………

We melted 300g of chocolate (200g milk and 100g dark) with a  packet of mini marshmallows and then the junior chef stirred in masses of rice krispies – no quantities I’m afraid but you need enough to use up the chocolate. At this point I should say the constant question was ‘may I lick the bowl now?’

I had marked out parchment paper with 8 crosses for the tree branches – 7cm, 9cm, 11cm, 13cm, 14cm, 15cm, 16cm and 17cm. The engineer in me loved this bit and even dug out my scale rule to make sure all measurements were accurate. The junior chef took the opportunity to make a Christmas card for her parents. 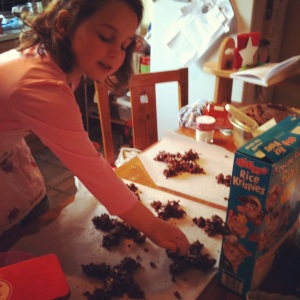 Then came the tricky bit – assembling the tree! We let the branches set and then having covered a large plate with tinfoil I melted some more chocolate, put a little on the plate to hold the largest branch in place, Then I added the branches in descending size, making sure that each alternate branch had it’s arms between the arms of the bottom branch (like a real tree!!)

We  ‘glued’  each branch in place with the melted chocolate – this is where my nerves got a little fraught as some of the branches drooped. Darina suggests supporting the branches with matchboxes until they set – I only have a large box of matches for candles so that wasn’t an option!

I should point out at this stage the junior chef was very busy – licking the bowl!!

We finished off the decorating with melted white chocolate, sparkles and mini snowmen….but at this stage between falling branches and sneaky tastes by the junior chef we decided to rename it a chocolate mountain!!

Nana came to visit for tea as did the Junior Chef’s Daddy who came to collect her and her baby brother aka Taster No 2!

The cake may not have looked like the one on the cover of Darina’s book (as Junior Chef pointed out!) but I’d just like to say that there’s very little of it left!

Maybe, just maybe, I might try another tree before Christmas………..